Perhaps you have been a party to the following conversation:

Person A: Remember in <substitute movie> when <subtle event happened>?

Person B: I watched that movie just last night and I didn’t notice.

If you are not the creative type, then allow me to substitute a fun example for you:

Person A: Remember in Toy Story when Mr. Potato head kisses his butt with his own lips, to mock the slinky dog?1 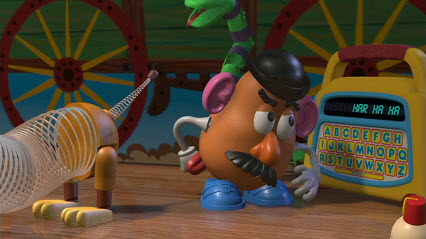 Person B: I watched that movie just last night and I didn’t notice.

Now, if you don’t have children, and don’t spend a lot of time around children, you’ll have to take my word for it on this one. Every other conversation you have with a child is like this.

This takes some time to sink in if you haven’t lived it. I’ve chosen to buy you a little time with a filler paragraph bereft of any useful information or subtle transition. Parents especially will appreciate this break, I hope. I’d also like to take this time to dispel any confusion regarding my choice of example. The fact that I used a kids movie2 is not relevant to the point.

Bill Watterson really nailed this concept in so many of his strips. Unfortunately, there is no legitimate Calvin and Hobbes archive for me to link to. Roger Ebert also expressed it with great clarity in his original review of Willie Wonka and the Chocolate Factory:

“Kids are not stupid. They are among the sharpest, cleverest, most eagle-eyed creatures on God’s Earth, and very little escapes their notice.”3

I recently had an experience with my children that illustrates the point perfectly. We were playing Plants vs. Zombies together4. They need a little help planting enough sunflowers and defending in the early part of each mission, so I get them going and then they take over. We’ve unlocked all the plants, so they get to choose from the full arsenal at the start of each mission. It’s ok if you don’t follow.

Their favorite plant is what we call “The Chomper.” This presents a problem as it is a sub-optimal purchase and offends me as both a gamer and a game developer. I try to support my children’s decisions though, even the suspect ones. The way it works is it “eats” the first zombie that approaches it. While it is chewing on the zombie (which takes a minute or so), an arm sticks out the side of the chomper’s mouth and it is vulnerable to attack.5

So there’s all this stuff flying around the screen, and in the middle of the action a chomper eats a mini zombie and right away, my daughter asks me why the arm sticking out of the chomper was a normal-sized arm, when the chomper had only eaten a mini zombie. Recall that the entire point of relating the story is that this sort of thing is not exceptional for a child. This sort of thing happens all the time.

There’s something powerful here that feels familiar when you think about it. I’m sure people in many fields have contemplated the issue, but of course I have the most personal experience in my own field.

Programmers struggle at times to grasp subtle details, even those right before their eyes.

This can manifest itself in so many ways. The nuance of a word choice in a requirement can be lost during development. A programmer can stare at a screen, knowing something is wrong (and where), but not being able to put their finger on it until someone leans over their shoulder to help. Consider just a few things a software organization might do to mitigate these issues:

The loss of an eye for detail could be a result of any number of things. It might be as simple as the same numbing effect that results from proofreading your own work8. Maybe children have an eye for detail because everything is new to them.

There is a company named Specialist People Foundation9 that deals extensively with issues in this area. They employ people with Autism and similar disorders and leverage the different nature of their employees’ perceptions to tackle a variety of problems. I like a lot of things about that organization, but I think the most impressive is how effectively they created a strength from something that is perceived as a weakness:

“Our consultants have a passion for detail that is second to none, and bring unique competencies to tasks that most company employees are less motivated to perform, and therefore more prone to errors. The unique characteristics of autism and similar challenges mean that our consultants actually enjoy tasks that most employees find boring, repetitive or difficult due to the level of detail and concentration required.”

You are overlooking any number of details (at this moment even), and your ability to capture them is probably declining, not growing. Since you only get so many chances to consume something before you’ve totally lost the eye for detail, you want to bring as much energy as possible to each attempt. I’m not aware of any better way to approach things, unfortunately.

Of course, what you decide to do with those details after you notice them is an entirely different discussion. Clearly though, you can’t make meaningful decisions about things you’re not aware of.