I found a file on ftp.uwp.edu, which provided a sketchy solution to the game. I used the table of mantras and words of power, and also the shadowlords names from that file. The author’s name was Blue Dragon. Mark Mierzejewski and Detlef Koehlers were very helpful in putting the finishing touches on this file. The world map was created by Andrew Schultz.

Ultima 5 was written by Origin Systems, and was my favorite game in the series growing up. I replayed it in the mid-90’s and wrote this guide when I did it. I’m posting it here for nostalgic reasons. If anyone still plays and finds it useful, shoot me a note.

For people that are interested in playing, it looks like the best way to get a copy is with this bundle on GOG.com: Ultima™ 4+5+6 Bundle

Most people playing this game today are unlikely to have the full (or any) documentation. Notably, the GOG version of Ultima V includes only a text version of the “Player’s Guide” which is one of the least valuable documents.

Museum of Computer Adventure Game History is a good source for the original documents. The two most important ones are linked below.

This map (courtesy of Andrew Schultz) shows the locations of all of the locations that can be entered on the top-level world map. This includes all towns, castles, keeps, huts, villages, dungeons, and shrines (marked with an abbreviation of the associated virtue).

There are also a few special locations marked on the map such as the Glass Sword location, the waterfall entrance to the underworld, and the location of the Mandrake and Nightshade reagents (the reagents are only available at midnight).

NOTE: The shrine of Spirituality is not on this map. You reach that shrine by entering any Moongate at exactly midnight. 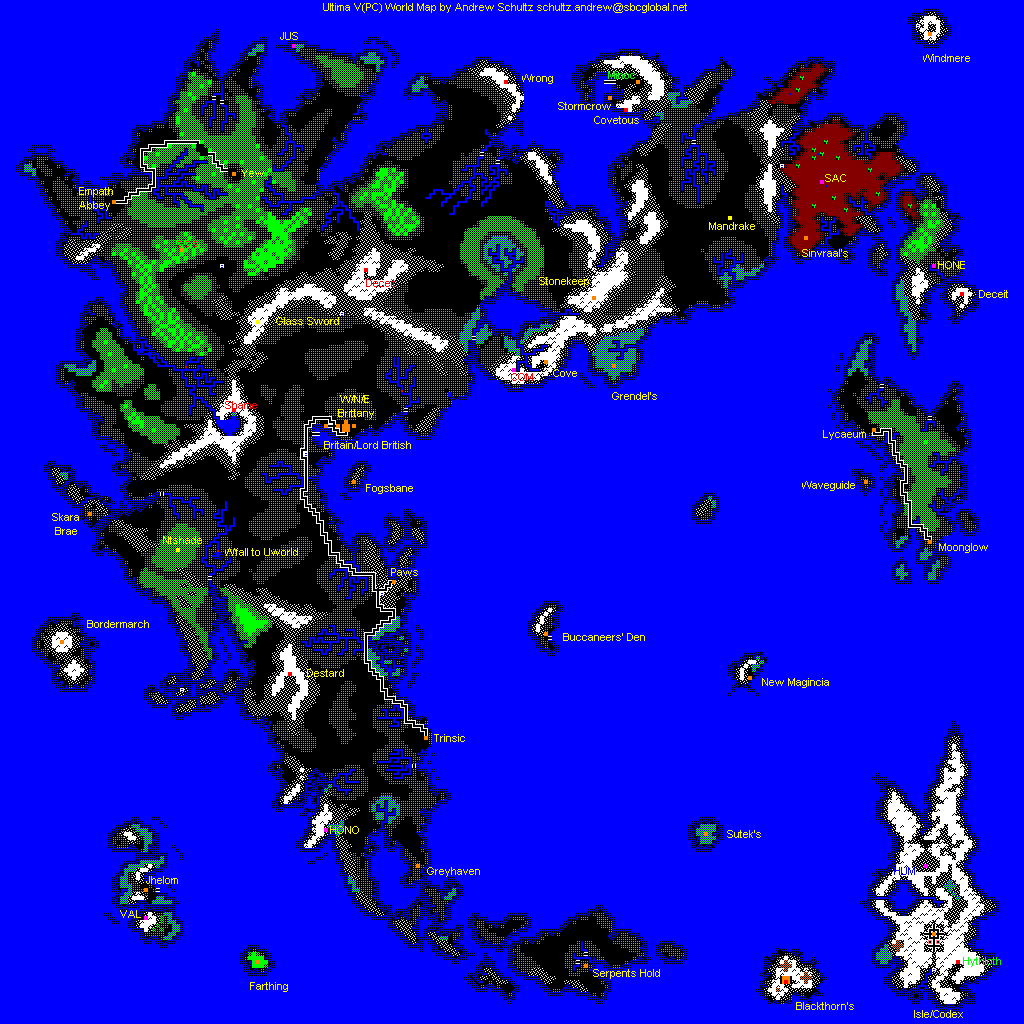 You start the game with Shamino (although he is injured) and Iolo, there is no reason to get rid of either of these two characters. The following is a table of other adventurers in the game who will join your quest, along with some useful information about them. I have assigned each character a rating which consists of the sum of the three statistics, plus the number of levels the character may still advance. This rating is useful for choosing which characters to have in your party, but doesn’t take into account the character’s spellcasting ability. Do not ask Saduj to join your party. Although he is one of the better characters, he is a member of the oppression, and will turn on you in combat.

MANTRAS and WORDS OF POWER

It is often useful to know the following passwords in order to get information from people.

The following tables specify which shops are in which towns. They also detail what reagents are available in each town.

The Shadowlords were spawned by three pieces of Mondain’s gem. You need to recover these three shards from the underworld in order to destroy the shadowlords and recover Lord British’s Sceptre.

You need these four items in order to complete the game.

Like most Role Playing Games, it is difficult to stay alive in the beginning. The game gets much easier once you buy your first magic axe. One approach to starting the game is the following.

In order to win the game, you must kill the three shadowlords, then get all four of Lord British’s artifacts and enter the underworld under Shame. To the East of where you emerge, there is a island covered with lava. Enter the dark center of the island, and use the amulet. Yell ‘Veramocor’ and enter the dungeon doom. Use the scepter to destroy the barriers, and leave the room in any direction. This dungeon is pretty tricky, but if you take the shortest path to Lord British, you should find the following rooms: